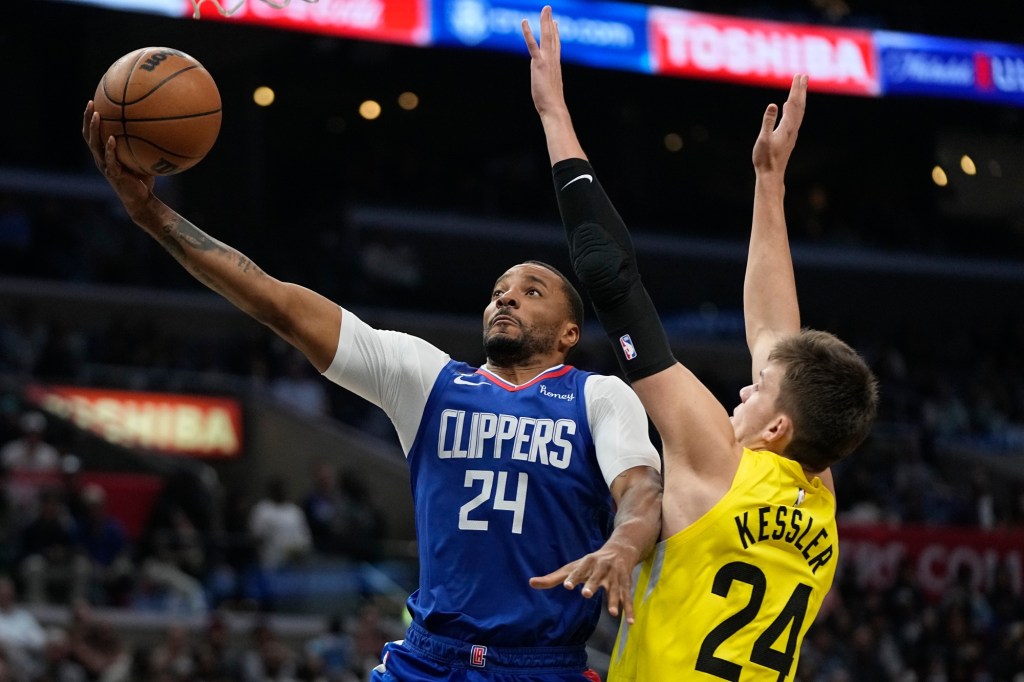 Clippers coach Tyronn Lue keeps bringing up the subject and Norman Powell continues not to listen when the conversation turns to the Sixth Man of the Year award. Powell insists he is not after individual accolades and the only hardware he wants get his hands on is the Larry O’Brien Trophy for winning the NBA championship. “If I’m in the running and I get it, great, but I think the main focus is always trying to help the team win and be the last team standing at the end of the year,” Powell said. “That’s my main focus and whatever accolade you get on the way there, it’s a bonus.” The numbers, however, back up Lue’s argument. Powell is averaging 13.7 points off the bench this season and 16.2 points in the past 10 games. In seven of his past eight games, he has reached double figures, punctuated by his 30 points in Monday’s 121-114 victory against the Utah Jazz. The guard also is contributing 2.6 rebounds and 1.4 assists a game. Former Clippers guard Jamaal Crawford was named Sixth Man of the Year in 2017 with similar numbers. “Like I said, Sixth Man of the Year, that should be his goal, and he has a great opportunity to do that, having 30 points on 15 shots off the bench,” Lue said. “Very efficient. And we need him to play well especially with guys being out and he’s stepping up, playing well for us.” Powell didn’t look much like a star when the season began. He struggled to find his spot in a crowded rotation. He found enough touches to score in double figures in just two of his first eight games. Lue took notice. This time, Powell listened to his coach, who told him that he had all the tools to turn it around and it wasn’t going to take an overhaul of his entire game. Powell just need a shot of confidence. “We knew what he can do,” Lue said. “Well, I knew what he can do offensively, scoring a basketball and like we said before, he works too hard. He puts too much work in for his offense not to come around. “He’s been playing great as of late. This is how we need him to play off the bench.” Powell, a 2017 second-round pick out of UCLA, said earlier this season that he was “nowhere where I needed to be. Didn’t expect it, but one thing about me, I always figured it out.” Buoyed by the confidence of his coach and the advice of the rest of the staff, Powell got to work and started to believe his game would improve. “The whole coaching staff and organization and my teammates are always telling me next shot. He (Lue) is always telling me to keep my head up and stop worrying about it. Related Articles Clippers | Norman Powell, Reggie Jackson propel Clippers past Jazz Clippers | Clippers’ Reggie Jackson, John Wall a willing, winning combo Clippers | Clippers pull away from Spurs, sparked by John Wall Clippers | Kawhi Leonard says Clippers ‘need to be better at everything’ Clippers | Clippers rally to beat Pistons in Kawhi Leonard’s return “It just comes from the amount of pressure I put on myself and how good I want to be and the amount of time I work on my game and the expectations I’ve set for myself,” Powell said. “He’s always telling me just next shot. He came in at halftime and told me next time I put my head down on a missed shot, he’s taking me out of the game. So, he’s pretty confident in my abilities and weathering the storm and waiting for that one game where everything starts dropping.” Like Monday night when he made 10 of 15 field goals, including 3 of 4 3-pointers to the delight of the Crypto.com Arena crowd, re-igniting Lue’s push for him to start looking at the Sixth Man of the Year award and even All-Star status. “I like the fact of not sugarcoating what the situation is and of him being direct and forward with me and the expectations so there’s nothing I’m leaving to guess or have to figure out,” Powell said. “He’s been direct. I know that I’m a big part of this team and that they need me.”