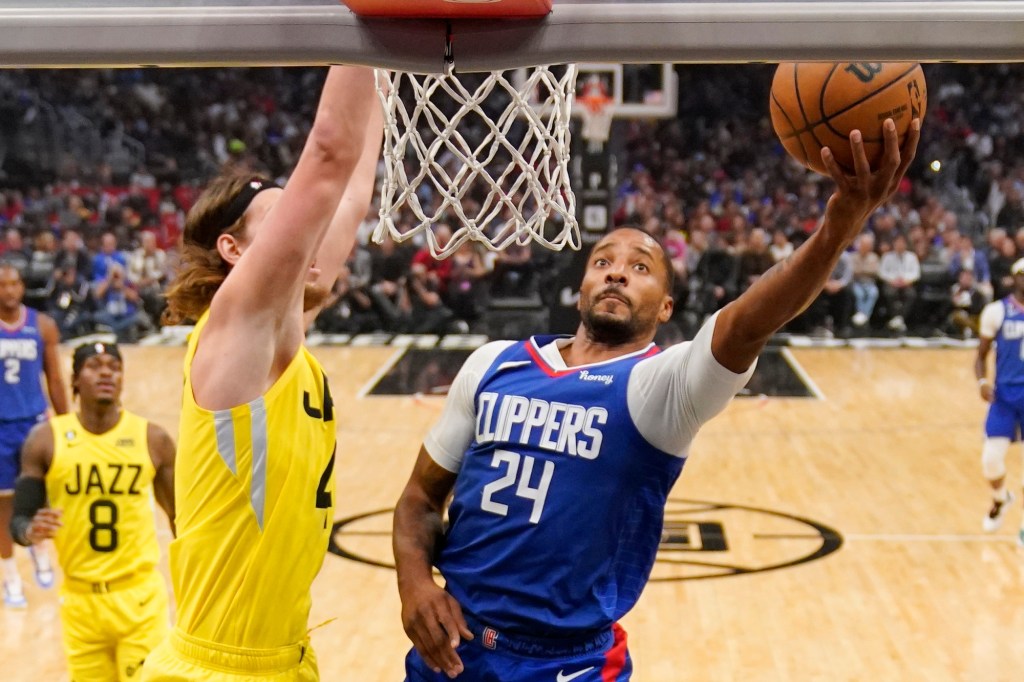 LOS ANGELES — The Utah Jazz was without guard Mike Conley. The Clippers didn’t have Paul George. Rudy Gay was missing from the Jazz’s lineup, while guard Luke Kennard was still on the Clippers’ bench because of a calf strain. Even without key players, both teams still had enough star power to make Monday night’s game competitive, a contest that saw each team take over the lead, lose the lead and sweat out the finish. In the end, it came down to which team could come up with the right play and that ended up being the Clippers. After several frenetic seconds that included misses and challenges, they held off the Jazz, 121-114. George missed his second game of the season after straining his right hamstring in the Clippers’ victory over San Antonio on Saturday and is out indefinitely. He sat out a game earlier this season because of a non-COVID-related illness. But the Clippers (11-7) didn’t flinch in his absence. Everyone helped push the Clippers to a thirdconsecutive victory. Reggie Jackson had a season-high 27 points, Norman Powell had a season-high 30 (the most he has scored in a Clippers uniform) and Ivica Zubac added 14 points and 14 rebounds. Then there was John Wall, who put on a fast-break show in the first half. Wall has been on a minutes-restriction schedule and doesn’t play both nights of back-to-back sets after missing most of the past two seasons. The intent was to bring him along slowly. The trouble is, Wall doesn’t know how to go slow. He was running in transition like his life depended on it in the first half. On a few such runs, Wall needed to throw backward to the teammate trying to catch up. And when he got moving, it didn’t matter who was on the receiving end of his quick flick-of-the-wrist passes; nearly everyone benefitted. He finished with eight assists and 13 points. The Clippers scored 22 fast-break points in the game. “I didn’t think it would come this quick, but he’s been playing at a high level, and we are getting into the paint and pushing the basketball,” Coach Tyronn Lue said. “It changes our team, and he changes who we are offensively.” After leading by as many as 17 in the first half, the Clippers fell into bad habits in the third quarter. They had collected 13 turnovers in the first three quarters and finished with 15. Related Articles Clippers | Clippers’ Reggie Jackson, John Wall a willing, winning combo Clippers | Clippers pull away from Spurs, sparked by John Wall Clippers | Kawhi Leonard says Clippers ‘need to be better at everything’ Clippers | Clippers rally to beat Pistons in Kawhi Leonard’s return Clippers | Clippers’ Kawhi Leonard upgraded to questionable for tonight’s game But with Kawhi Leonard on the floor, they were able to keep the Jazz (12-6) from building on a slim three-point lead. The Clippers kept fighting until they regained the lead late in the game. The Clippers ran out to a 66-56 lead at the half behind the spirited play of Wall, the shooting of Powell, the rebounding of Zubac and the defense of Leonard. Leonard didn’t have big numbers in his first 11 minutes, but his presence on the court opens things up for his teammates on offense. Four players were in double figures in the first half and the Clippers shot 54.2% for the half. “It’s a different game because of his ability to impact on both sides of the court,” Jazz coach Will Hardy said. “There are very few players in the league that you scout defensively as well as offensively because of how disruptive he can be.” The Jazz missed Conley, who had 17 points and seven rebounds against the Clippers when the teams met on Nov. 6, but Jordan Clarkson (26 points) and Lauri Markkanen (28) more than made up for his absence. More to come on this story.