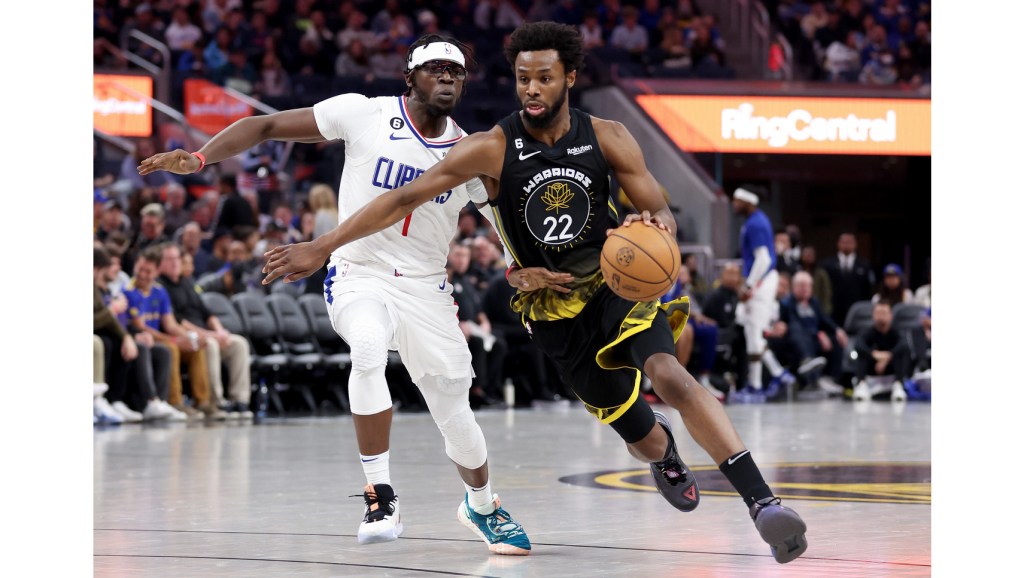 By JANIE McCAULEY AP Sports Writer SAN FRANCISCO — The short-handed Clippers were going to have their hands full, regardless, but when the Golden State Warriors get Andrew Wiggins going with the rest of their Hall of Famers, it can be too much for any squad. Andrew Wiggins scored a season-high 31 points, hitting back-to-back 3-pointers during a key stretch midway through the third quarter, and the Warriors took advantage of the absence of All-Stars Kawhi Leonard and Paul George to hand the Clippers a 124-107 defeat on Wednesday night. Wiggins shot 12 for 18 and matched his most 3-pointers this season with six in his third straight 20-point performance. Steph Curry added 22 points, nine assists and six rebounds, while Klay Thompson scored 18 points. He hit his first three shots and two 3-pointers and four of his initial five shots on the way to 15 points in the opening quarter. After a one-handed slam in transition late in the first, he raised both arms to get the crowd going as he ran back on defense. After a slow start this season finding his shooting groove, Thompson was coming off a season-best 41-point game at Houston on Sunday in which he made 10 3-pointers. Marcus Morris Sr. scored 19 points to lead the Clippers and Terance Mann added 17. Amir Coffey made his initial three field goals, but the Clippers went just 5 for 13 from long range in the first half to fall behind 66-47 at the break as the Warriors shot 56.5%. John Wall was limited to nine points on 2-for-8 shooting and missed all three of his 3-point attempts. Leonard sat out with a sprained right ankle after he landed on it Monday while trying to block a shot in the fourth quarter of Monday’s home win against the Jazz. George missed his second consecutive game with a right hamstring strain. Clippers coach Tyronn Lue isn’t sure when Leonard will return. “Woke up with some soreness in his ankle. Saw the play, it was a little more than we thought,” Lue said. “But he’s OK, feeling better, getting better. So we don’t know a timetable right now though.” Warriors coach Steve Kerr wants to use Draymond Green more regularly with the second unit when possible to give the reserves a reliable ballhandler and floor leader given their recent struggles. Early in the fourth, Green drove the length of the floor and into the pain then dished off to Anthony Lamb for a layup that made it 103-82 with 10:41 to play. Green finished with 12 assists, nine points and seven rebounds. Golden State notched its fifth game in the last six with 30 or more assists and leads the league. The Warriors committed only five first-half turnovers and 13 overall as Kerr has stressed taking care of the ball. The Warriors won their seventh straight home game and improved to 8-1 at Chase Center overall. TIP-INS Clippers: The Clippers wound up 11 for 28 from 3-point range. … They have lost four straight on the Warriors’ home floor. They last beat them on Jan. 6, 2021, handing them a 108-101 defeat. Warriors: Jordan Poole missed all eight of his 3-point attempts in a rare off night. … Jonathan Kuminga blocked a shot by John Wall into the stands in the third. … The Warriors are 5-1 at home against the Western Conference. UP NEXT The Clippers host the Nuggets on Friday night, having dropped their past two against Denver.