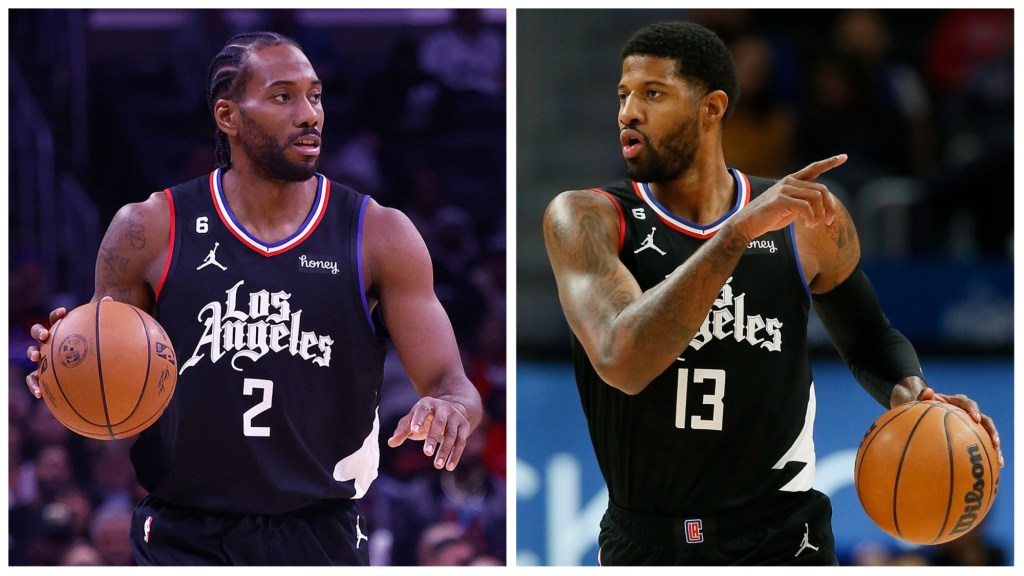 Kawhi Leonard is back to being himself. Any doubt, check his statistics over the past seven games. The All-Star forward is averaging 29.8 points, 6.7 rebounds, 3.6 assists and 2.1 steals. Paul George, the “new” point guard is back, too. Check his numbers from the Clippers’ previous three games. Since returning to the lineup, he has posted stat lines – highlighted by a 16-point, 12-assist performance against the San Antonio Spurs – that read like someone who never had a hamstring injury. For the first time in a long while, the Clippers are seeing what it’s like to have their two biggest stars on the court at the same time. Leonard and George have played together just four times in January, and although it’s a small sample size, the Clippers will take it. “Playing through our best players, that’s how we want to play, that’s how this team has been constructed,” Coach Tyronn Lue told reporters last Friday. “When we have those guys on the floor, we know we can be a dangerous team.” It’s too soon to start planning any sort of parade as the Clippers (25-24) have won only two games since their stars reconnected on the court. One of those victories, though, came Sunday against the Dallas Mavericks (25-23) who are a half-game ahead of the Clippers in the Western Conference standings, and this could be a start toward emergence from mediocrity. Despite their recent success, Leonard used a cautious tone when discussing their final 33 games of the season. “We still need to improve. We have a lot to improve if we want to be a great team,” Leonard said last week. A victory against the surging Lakers on Tuesday night would add to the collective optimism surrounding the team. The short-handed Lakers – still playing without All-Star big man Anthony Davis among others – have won six of their past 10 games, including their past two. “The things that (we) are building are our attention to details,” Robert Covington said Sunday. “The last few practices we talked about our principles and being more aggressive in our approach.” And that has started lately with Leonard, who has missed 25 games this season because of injuries and injury management but continues to look like his old self. In his past seven games, he has been shooting 54% from the field and 50% from behind the arc. Leonard’s 36-point, seven-rebound performance and influence on defense against the Spurs caught his former coach’s eye, prompting Greg Popovich to say, “He’s one of the finest players in the league. We’re talking about the very top of the list, he’s with those guys.” Lue agreed, saying that Leonard’s “pop is there. On offense, he’s getting into his spots. … He looks really good.” Leonard said he sees his confidence and muscle returning since being sidelined most recently because of an ankle sprain following knee soreness stemming from his June 2021 ACL injury. If he is 100%, he can duplicate his performances of the past two games. Related Articles Clippers | Kawhi Leonard, Paul George lead Clippers past Mavericks Clippers | Kawhi Leonard’s big night carries Clippers past Spurs Clippers | Can struggling Clippers embrace ‘sense of urgency’ in time? Clippers | Swanson: NBA ‘Snitch’ changing the game with his viral critiques Clippers | Depleted Clippers no match for Lauri Markkanen, Jazz “I started to lose some of my muscle. I’ve lost probably 15 pounds, so I’m feeling a lot lighter and feeling a little bit better out there,” he said. “I was kind of shaking in the beginning – flaring my knee, then coming back for three (games), then having a grade-three ankle sprain.” When Goerge came back, he found himself in a new role. With John Wall out with an abdominal injury and Reggie Jackson having been moved to the bench, Lue put the ball in wing Terance Mann’s hands. While Mann has handled the role of a non-traditional point guard for several games, George is seeing a lot more ball-handling duty. Against the Spurs, George had 12 assists and no turnovers. Lue said after Sunday’s game that George didn’t have to “facilitate and try to make the play …(but) to go and get yours as well.” Lue added that George has a good understanding of what the coach wants to run and “how we want to run it.” “That’s how we want to play. That’s how this team has been constructed,” Lue said in his postgame comments. “When we have those guys on the floor, we know we can be a dangerous team and we just have to keep our guys healthy and upright.”