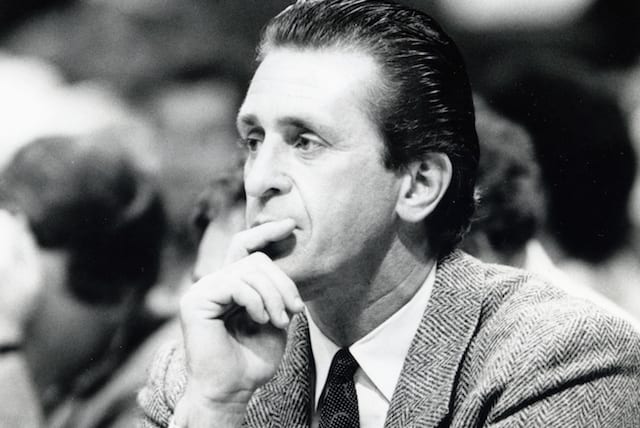 Pat Riley is a basketball lifer who has succeeded at basically every level of the sport, from his playing career, to his time coaching the Los Angeles Lakers, New York Knicks and Miami Heat as well as the multiple championships he’s won as an executive. On Jan. 24, 1990, Riley added another achievement to his nearly endless list when his Lakers team beat the Indiana Pacers 120-111 for his 500th career coaching victory. It made Riley the fastest coach to reach that win total in NBA history. At the time, Riley also became the 13th head coach to get that many wins under his belt, and did so with a record of 500-184, blowing the prior record held by Don Nelson (500-317) out of the water. It wasn’t the first time Riley made history with how quickly he racked up victories. The legendary Lakers head coach who was the architect of the team’s beloved and successful “Showtime” squads of the 1980s and ’90s was also the fastest coach to 300 wins, which he did in just 416 games. The mark was one of Riley’s last achievements while coaching the purple and gold, as he left the Lakers later that year with a record of 533-194. Riley would go on to find more success beyond Los Angeles, however, finishing his coaching career (most likely, although with Riley there is always a chance of a comeback) with a record of 1210-694. It’s good for the 15th-best winning percentage in NBA history and fourth-best winning percentage among the 30 coaches to helm more than 1,000 games in the league. Riley would go on to coach the Knicks and Heat, the latter of which he now runs as team president in his 22nd year as part of the organization where he won championships in 2006, 2012 and 2013. The first came as head coach of the team and latter two as an executive. Have you subscribed to our YouTube channel? It’s the best way to watch player interviews, exclusive coverage from events, participate in live shows, and more!