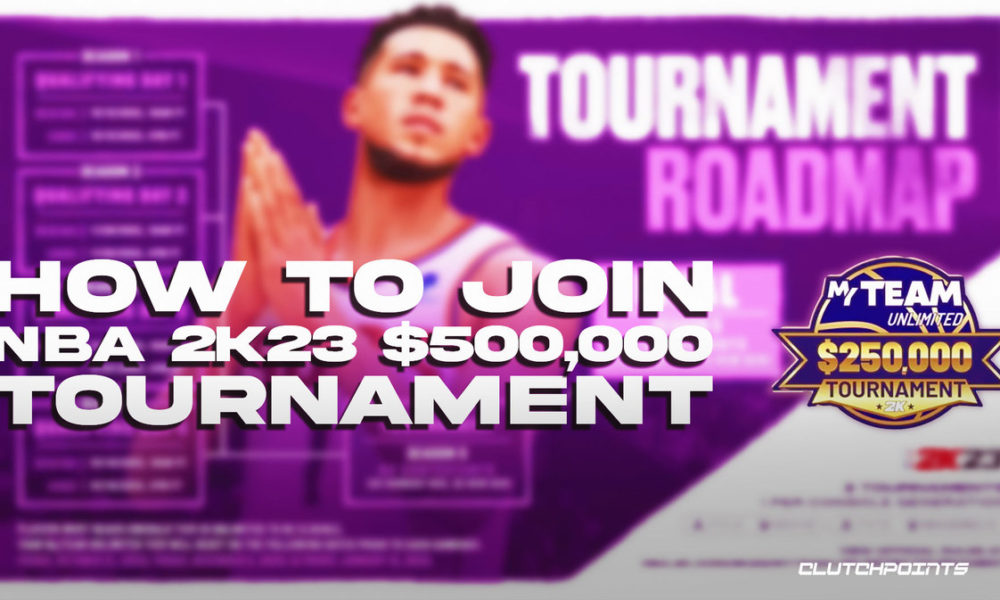 A total of $500,000 are being given away as rewards to the best player in the upcoming NBA 2K23 MyTEAM Tournament. Here’s how you can join. How to join the NBA 2K23 MyTEAM Unlimited Tournament with a $500,000 Prize Pool Players stand the chance to win up to $200,000 if they win one of the two NBA 2K23 MyTEAM Unlimited Tournaments coming up in the next few months. Here’s how you can join one of these two tournaments, each with a $250,000 prize pool, for a total of $500,000 in prize winnings this year. There are two tracks for the NBA 2K23 MyTEAM Unlimited Tournament – one for each console generation (e.g., PS4, Xbox One and PS5, Xbox Series X). The annual tournament will have four GameDays across the four seasons for NBA 2K23 MyTEAM, with anyone who owns a game copy eligible to join the competition*. *For the full eligibility rules, click here. The tournament is open to residents from the 50 United States & D.C. (excluding AZ, CT, MD, and ND), Australia, Canada (excluding Quebec), Chile, Denmark, France, Germany, Great Britain, Greece, Greater China, Indonesia, Israel, Japan, Mexico, New Zealand, Norway, Philippines, Portugal, Republic of Ireland, Singapore, South Africa, South Korea, Spain, Sweden, Switzerland, Thailand, and Turkey, and entries originating from (i) individuals not residing within the preceding jurisdictions or (ii) any other jurisdiction are not eligible for entry. Qualification Requirements To be eligible to join, players will have to first reach Emerald Tier in Unlimited during a Season in the run-up to the GameDays. As there are four qualifying GameDays, players have the time to build up their Unlimited team across the next four seasons and catch up on those who have the money to burn on their MyTEAM. However, remember that your Unlimited tier level resets after the start of each season, so make sure that you reach Emerald on each of the qualifying GameDays: Season 1 GameDay: October 15, 2022, 10:00 AM PT to 2:00 PM PT Season 2 GameDay: November 26, 2022, 10:00 AM PT to 2:00 PM PT Season 3 GameDay: January 7, 2023, 10:00 AM PT to 2:00 PM PT Season 4 GameDay: February 18, 2023, 10:00 AM PT to 2:00 PM PT The four highest scoring entrants for Xbox and the four highest scoring entrants for PS for each GameDay on each Track (for a total of sixteen players for each GameDay) will be eligible to compete in the Tournament for that Track. Note that to participate, players are required to be able to play online, and hence, if playing on Xbox, an Xbox Gold Service subscription is required, and for PlayStation, a PS Plus Essentials subscription. Once you’ve reached Emerald Tier, you may join GameDay on any of the dates above by selecting the Tournament menu in MyTEAM within the contest periods. You will have four entries to qualify for the Tournament, aiming to get the highest score amongst all players in your Track and console generation. You will receive a Score for each completed Qualifying Game from the games played during GameDay based on a combination of factors including the quality of your roster, the quality of your opponent’s roster, and your performance in that game. Your Total Score will lock at the end of that GameDay. Winning entrants will be notified by 2K by March 4, 2023, 10:00 AM PT for Current Gen or by March 5, 2023, 10:00 AM PT for Next Gen. Tournament Brackets The 64 players qualifying from the GameDays (i.e., 16 Xbox and 16 PS for each Track, for a total of 32 for Xbox and 32 for PS) will be competing in a Tournament that is scheduled to take place on March 4, 2023 (for Current Gen) and March 5, 2023 (for Next Gen) at 10:00 AM PT per each day. For each track, one tournament bracket will consist of 16 players on Xbox and 16 players on PS. Players are required to play on the platform they used to qualify in GameDay, except for the Championship Finals which shall be played on either the PS4 or the PS5. The champion of each tournament bracket will then be named a Finalist and will stand a chance to bring home the cash prize. The winner of the Xbox bracket will then face the winner of the PS bracket on a PlayStation 4 or PlayStation 5, depending on the Track, with both players already securing at least $50,000 in cash prize. Prize Pool Each Track will have a $250,000 prize pot for a total of $500,000 prize pool for the entire NBA 2K23 MyTEAM Unlimited Tournament. In the Finals, the last two players for each track stand a chance to win the grandest prize in NBA 2K23. Champion – $200,000 Runner-Up – $50,000 What are you waiting for? Start the grind and build the best MyTEAM this season!   The post How to join the NBA 2K23 $500,000 MyTEAM Unlimited Tournament appeared first on ClutchPoints.