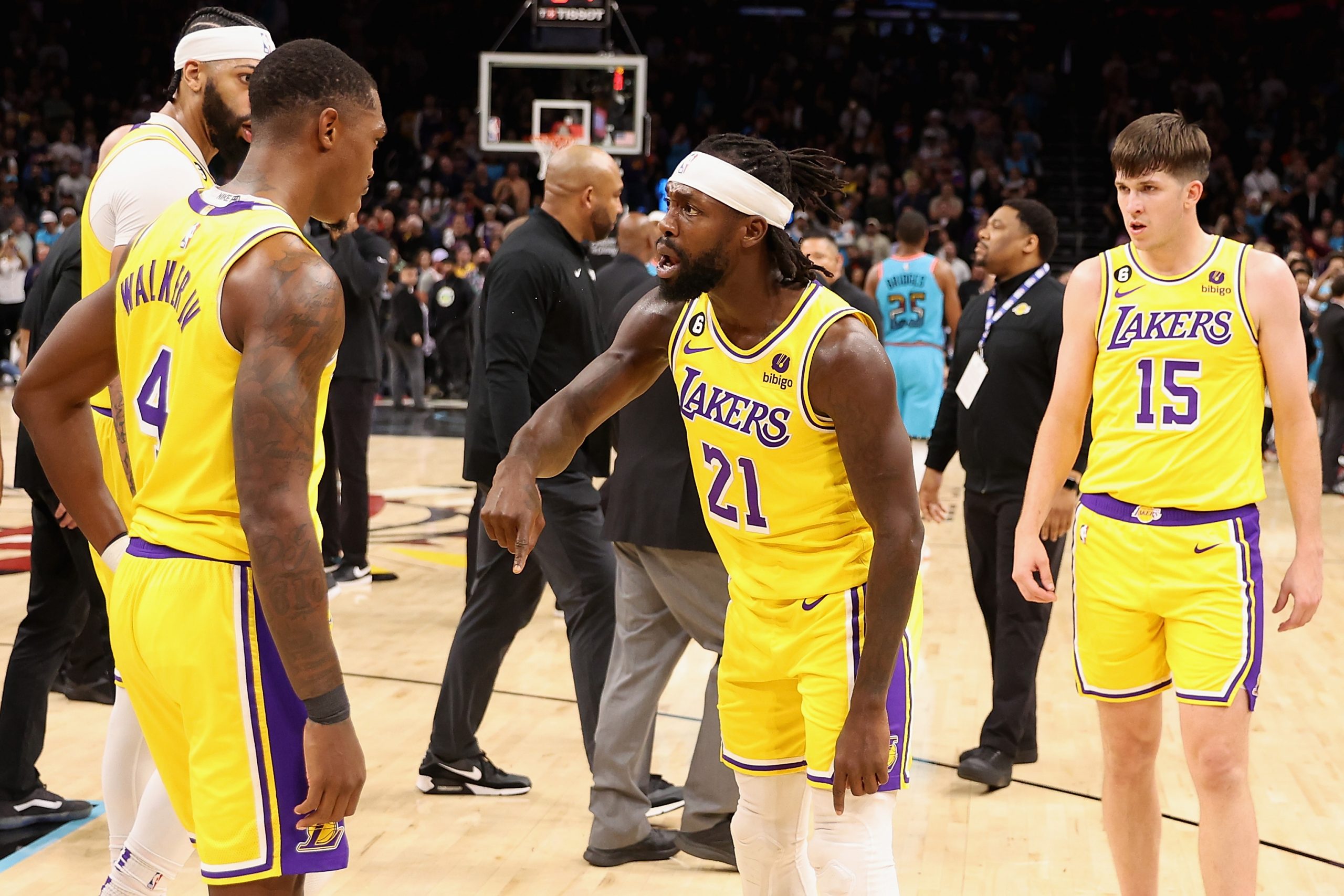 Tempers began to flare with just under four minutes to go in the Tuesday night game between the Pheonix Suns and the Los Angeles Lakers. After Lakers guard Austin Reaves tried to lay the ball up strong against Suns star shooting guard Devin Booker, Reaves was met with a block from Booker, and it seemed like a bit of trash talk added to it. As the whistle was blown and the next possession was about to commence, Reaves was just about to roll over and get up off the hardwood when Suns center Deandre Ayton stood over him and seemed to have some words for Reaves as well. Then like lightning out of a bottle, Patrick Beverley sprinted over to Reaves and shoved Ayton from behind to the ground. That is when everybody on the court comes together; there are more words, some pushing, and shoving, but that’s just basketball. After things calmed down, the refs gave Booker a flagrant 1 foul and ejected Beverley from the game. Tempers flare in Lakers-Suns pic.twitter.com/XZbkf4pWmN— SportsCenter (@SportsCenter) November 23, 2022 The Suns went on to win 115-105; then, in a postgame interview with NBA on TNT, Booker had a message to send to Beverley. Booker was asked what he thought about how everything unfolded during that heated moment in the game, “It was more than it was supposed to be. Pat need to stop pushing people in the back, man; push ’em in the chest. That’s all I gotta say.” "Pat need to stop pushing people in the back man. Push them in the chest." Devin Booker speaks on the late game altercation with @ChrisBHaynes pic.twitter.com/TMYftYYkX0— NBA on TNT (@NBAonTNT) November 23, 2022 Patrick Bev also spoke to the media following the game and had a lot to say following his ejection via ESPN. “Got a person on the ground, two people looking over mean-mugging and puffing their chest out, and referees don’t get into it to kind of separate it, control the game, so I’m going to stand up for my teammate. I’m not going for that s—. Obviously, it’s unfortunate that it happened on national tv, but you know me. Regardless of what’s going on, I’m a big fan of protecting my teammates. I’m a foxhole guy. I put on my jersey, and I commit to the team, I commit to the city, and it’s kind of my motto. I’m a foxhole guy. Very unfortunate situation, though.” Reaves also commented on the situation postgame, saying that he told Beverly that he appreciated him five times afterward. “He’s a team player,” said Reaves. “He rocks with who he rocks with. Whoever is on his team, you respect him. You love him. You’re glad he’s on your team. When he’s not, he’s a pest, does all that stuff, all those little things. But I just respect him for who he is and standing up for me.” "It's just happening too many times. I just think the league needs to look at those kinds of plays. They're just unnecessary. There was obviously some tension, but with us, it's happening too many times." Monty Williams on Patrick Beverley shove of Deandre Ayton. #Lakers #Suns pic.twitter.com/wOCEK6yRNB— Duane Rankin (@DuaneRankin) November 23, 2022 Suns coach Monty Williams also shared his thoughts postgame saying; “It’s just happening too many times. I just think the league needs to look at those kind of plays. They’re just unnecessary. There was obviously some tension, but with us, it’s happening too many times. You know, when you push a guy when he’s not looking like that, that’s not called for. There’s going to be physicality; there’s going to be tension in games; that’s just the nature of basketball.” The final person to give their take on the situation was Ayton, who simply said; “He ain’t hurt me, he didn’t take nothing out my pocket, and I ain’t react.” The post Lakers and Suns Comment on Heated Exchange Between Deandre Ayton and Patrick Beverley appeared first on SLAM.